Antimicrobial or antibiotic resistance is one of the greatest threats to human health worldwide, creating an urgent need for innovative solutions and novel approaches. It is a highly complex problem that affects the entire society and is driven by many interconnected factors including excessive use of antibiotics (especially in veterinary medicine and livestock feed), reimbursement regulations that reduce the price, also for new antibiotics, making development of these drugs uneconomical and unattractive to pharma companies, and last but not least the lack of new scientific approaches. Coordinated action across all government sectors and society is required to minimize the emergence and spread of antimicrobial resistance and to push the development of resistant breaking new therapies.

AMR and its consequences

Microorganisms (such as bacteria, fungi, viruses, and parasites) have the ability to “change” when they are regularly exposed to drugs (such as antibiotics, antifungals, antivirals, antimalarials, and anthelmintics). To avoid elimination from the patient‘s body, they mutate to so called “superbugs” resistant against antimicrobial drugs.

Without effective antimicrobials for prevention and treatment of infections, medical procedures such as organ transplantation, cancer chemotherapy, diabetes management and even smaller surgeries are becoming high-risk interventions.

Patients in intensive care units (ICUs) are particularly vulnerable to infections. The consequences range from chronic wounds following surgeries to sepsis or fatal infections. Gram-negative and gram-positive pathogens are considered to be amongst the most serious threats to public health and represent a major unmet medical need. In addition, antimicrobial resistance significantly increases the cost of health care with lengthier stays in hospitals and more intensive care required.

According to the WHO, each year about 2 million people in the U.S. alone acquire bacterial infections in hospitals with about 70% of these infections caused by bacteria being resistant to at least one antibiotic drug leaving doctors with only few options to treat their patients. As a result, 90,000 of these patients die.

Severall investigations[1, 2, 3] estimates up to 10 million deaths per year worldwide by 2050 if current trend continues. 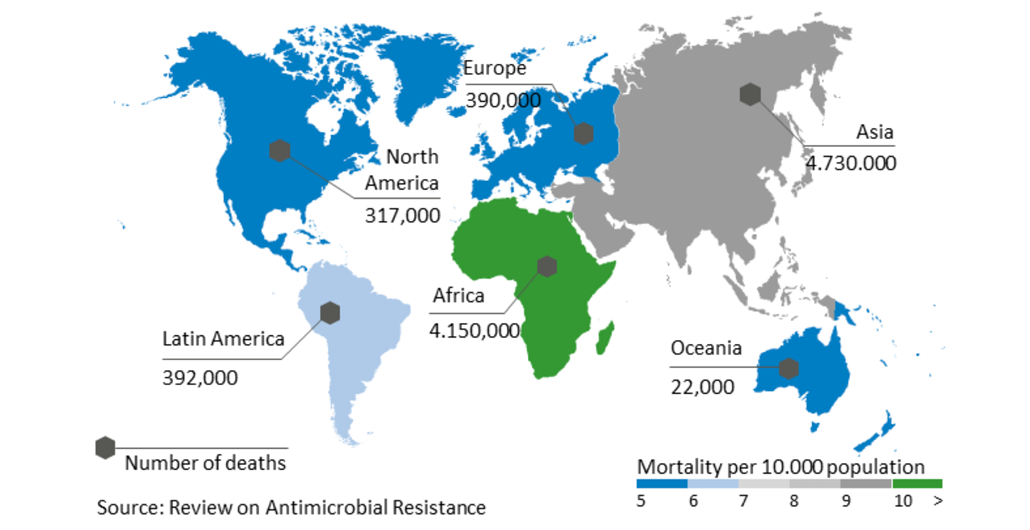 Reasons why the innovation gap in antibiotics are manifold and diverse:

AiCuris believes that “a total market failure”, is the reason why many of the large pharmaceutical companies still abandon the development of new antimicrobial drugs. Antibiotics can save lives in a few days. In contrast to cancer drugs or drugs with long-term treatment, new antibiotics are not adequately remunerated given their impact and live-saving potential. While several hundred thousand Dollars per therapy can be set for some cancer drugs, the costs for an antibiotic treatment are mostly in the small four-digit Dollar range. But the development costs are the same range. In addition, new antibiotics would only be used very rarely to prevent the development of new resistances. The result: high development risk on the one hand and, even if successful, only low sales on the other hand which are offset by Dollar billions of development costs.

In layman terms: “You buy and pay for a sprinkler system in the hope you never need to use it. But in case you need it, it is there. No company would sell you a system if it were only paid for each use.”

Alternative concepts for pricing and reimbursement are being considered worldwide. But they are still a long way off. And as long as big pharmaceutical companies do not see an economical business they will not really get involved here. However, they are willing to engage: more than 20 leading pharmaceutical companies invested an average of $50 million each to launch the $1 billion AMR Action fund, with the goal to invest in smaller biotech companies, provide industry expertise and bring 2-4 new antibiotics to patients by 2030.

AiCuris is one of the few European companies that since inception is highly focused on the developing of new anti-infective agents that overcome resistance. The company has extensive expertise in developing novel, effective therapies against infectious diseases and its first compound, Letermovir, has successfully been brought to market in partnership with MSD. Thus, Aicuris has the experience and financial strengths, remaining committed to attack antibiotic resistance in new ways.

In July 2019, AiCuris signed a long-term cooperation for the development and optimization of Artilysin®-based drug candidates for various anti-bacterial indications including e.g. hospital-acquired pneumonia and sepsis with Lysando AG.

Artilysin®s represent a completely new class of molecules with a novel mode of action. Unlike common antibiotics, the effectiveness of Artilysin®s is not dependent on binding to a specific receptor nor interfering with the cell’s metabolism. Artilysins® are able to pass the protective outer membrane of gram-negative bacteria and have increased affinity to the cell wall of gram-positive bacteria. The interaction of the Artilysin®s with peptidoglycans destabilizes and degrades the bacteria cell envelop, causing the cell to burst from the high osmotic pressure within seconds.

The use of Artilysin®s in other areas such as veterinary medicine and medical devices has already shown a proof-of-principle of this molecule class. Artilysin®s can therefore also be used against multidrug-resistant germs, where antibiotics today are no longer effective.

AiCuris is steadily looking for innovative projects and programs to partner in the field of antimicrobial resistance.

Next milestones in AMR:

References and additional information on AMR:

If you have further questions regarding partnering of our projects please contact: